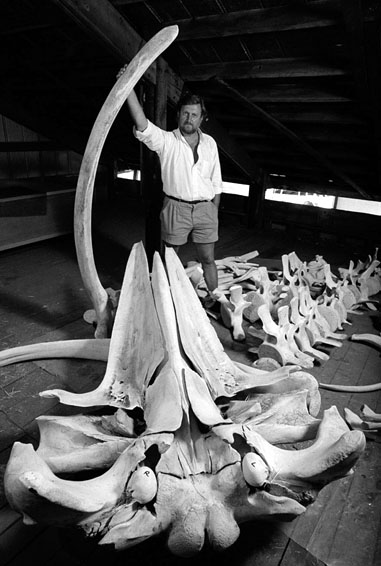 Joshua Laerm, son of Rolf and Idella Laerm, was born in Waynesboro, Pennsylvania on September 27, 1942 and raised in Blue Ridge Summit, Pennsylvania. He obtained his bachelor of arts degree in philosophy from Pennsylvania State University in 1965; his master's degree in zoology in 1972 from the University of Illinois; and his doctorate in zoology from the University of Illinois in 1976. Formally trained in Vertebrate Paleontology, Dr. Laerm was awarded a pre-doctoral Smithsonian Research Fellowship in 1972-1973 to pursue studies in evolutionary biology. In 1976, he joined the faculty of the University of Georgia where he remained until his death. Dr. Laerm became Curator of Zoological Collections at the University of Georgia Museum of Natural History in 1977 and Museum Director in 1978. He was also Professor in the Institute of Ecology, holding adjunct positions in the Daniel B. Warnell School of Forest Resources and the Department of Geology.

The development of the University of Georgia Museum of Natural History over the past 20 years has been almost exclusively the result of Dr. Laerm's vision, leadership, and energy and his own commitment to natural history research, service, and education has inspired many others. The Museum of Natural History is his enduring legacy to the people of this place we call Georgia and beyond.

Many of Dr. Laerm's scientific publications were in systematics, mammalogy, and natural history. He had been active in cross-disciplinary field research throughout the southeastern United States for the past 20 years. His most recent research interests centered around conservation problems related to mammals of the southeastern United States. At the time of his death, Dr. Laerm was involved in several systematic and distributional studies of mammals in the southeastern United States. Since many animals listed as threatened or endangered, or candidates for listing, are poorly known from taxonomic, zoogeographic, and life history perspectives, he had initiated several projects dealing with mammalian distributions and habitat correlations in the Southern Appalachians and was also completing a volume on mammals of the southeastern United States. He was also active in a marine mammal stranding network and was in the final stages of completing a book on the marine mammals of the western North Atlantic Ocean. Dr. Laerm's research was funded through numerous state and federal agencies with management and conservation mandates. Recent aspects of his research were supported through the National Science Foundation's Long-term Ecological Research programs in the Okefenokee Swamp and at Coweeta Hydrologic Laboratory. He also served on the executive committee for the Association of Systematics Collections. In 1994-1995 he accepted a Smithsonian Visiting Research Fellowship.

Dr. Laerm is particularly remembered for his outstanding instructional role at the University of Georgia. In particular, he included both undergraduate and graduate students in his research through a variety of creative instructional methods. Over 200 students were actively involved in collection-based research and field experiences through the Museum of Natural History's Summer Research Fellowships and Undergraduate Internship Program, and both graduate and undergraduate students were co-authors with him on numerous presentations and publications. Students working with Dr. Laerm experienced a unique combination of thoroughness, rigor, enthusiasm, hard work, and joy of learning that inspired many of them to pursue careers in museum studies, systematics, environmental education, and environmental law. His annual lecture on dinosaurs was presented to packed audiences of students from across campus, and his door was always open.

In addition to his scholarly work, Dr. Laerm was a contributing editor for Georgia Wildlife (recently renamed Southern Wildlife) and the author of numerous popular articles relating to Georgia's natural heritage. He also served as Trustee and Secretary of the Highlands Biological Foundation and was instrumental in setting up natural history museums at Highlands Biological Station and Rock Eagle Environmental Education Center.

A fund has been established in memory of Dr. Laerm to support student research in natural history. Contributions can be made to the UNIVERSITY OF GEORGIA FOUNDATION and sent to the Museum of Natural History, Natural History Building, University of Georgia, Athens, Georgia 30602-1882.

The Joshua Laerm Academic Support Awards are provided annually to support undergraduate and graduate studies in natural history by students currently enrolled at the University of Georgia.

We appreciate your financial support. Your gift is important to us and helps support critical opportunities for students and faculty alike, including lectures, travel support, and any number of educational events that augment the classroom experience.

Every dollar given has a direct impact upon our students and faculty.